This online exhibit has been separated into chapters. These include an essay (below) about  prominent West Virginian, Frances Benjamin Johnston's impact on historic preservation nationwide and several galleries of selected work organized thematically. This project was curated by Ksenia Bradner, Preserve WV AmeriCorps member serving with the Preservation Alliance of West Virginia in 2020. The project is made possible by support from AmeriCorps, Volunteer West Virginia, and the West Virginia Humanities Council.

Visit the take-home activity, Go Behind the Lens, and the gallery of photos taken of West Virginia historical places.

​“…[t]he records I have been able to secure under the Carnegie grant would never have been made, if I had not seen these documents in brick and stone disappear almost before my eyes, and, (to be a little blunt) to have become hell-bent to do something about it before they should vanish entirely.” [i] 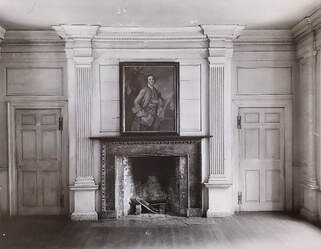 One of the photos Frances Benjamin Johnston took of Harewood.
both in Jefferson County.  Preservation Alliance of West Virginia is celebrating Johnston’s prolific legacy in preserving the memory of our built environment through her work. We are excited to recognize her as a famous West Virginian, born in Grafton (Taylor County) six months after West Virginia broke away from Virginia during the Civil War.

​           At the time of the Civil War, Grafton was an important railroad route for timber and it is believed her father worked for the B&O Railroad. She was the only surviving child of Anderson Doniphan Johnston and Frances Antoinette Benjamin.[i] Frances was raised in middle class comfort, and by the time she was nine years old, the family had moved to upstate New York and then Washington D.C. Johnston’s father worked for the Treasury Department and her mother was the Washington correspondent for The Baltimore Sun newspaper. The family enjoyed a vibrant social life in the federal city and from early adolescence, Frances formed lasting relationships with Washington high society, artists and intellectuals who would help shape her career. By her late teens and early twenties, Frances had received a sophisticated education for the time.

Frances studied art in Paris at the Academie Julian from 1883 to 1885. Upon completion of her studies, she returned to Washington D.C. where she continued her art studies at the Corcoran School of Art and the Art Students’ League. She eventually gravitated away from painting to journalism and photography and began writing a series of short newspaper and magazine articles.  Her first camera came from family friend George Eastman – the founder of Kodak – who gave her an early Kodak roll-film camera.[ii] Frances soon procured an apprenticeship under Thomas William Smille, director of photography at the Smithsonian Institution. Ever ambitious, she opened a studio in 1890 in her parents’ Washington D.C. townhouse, and in 1894 had her very own photographic studio. Within ten years of opening her studio, Frances had amassed a list of notable clients such as the Roosevelt family, Susan B. Anthony, and Mark Twain. Johnston’s career, while made possible by the cultured privilege she was born into, can still be considered self-made.
Of all her work, Johnston found the most satisfaction in her photography of historic architecture commissioned by the Carnegie Corporation.[iv] The very nature of Johnston’s work as a photographer was to record a subject in a moment in time. However, she became enamored with the Colonial era architecture of the South in 1926 during a garden photography assignment for Town and Country magazine: “It was through my travels after gardens that I noticed the fine old houses which figured so importantly in colonial history and which are falling to wrack and ruin unhonored and unsung.”[v]

The third and final phase of Johnston’s career began just at the right time. The Great Depression made Johnston’s garden photography suddenly irrelevant. Johnston herself was aware garden photography commissions would soon dry up, and she shrewdly turned an assignment to photograph one estate in Fredericksburg, Virginia in 1927 into a commission for a comprehensive photographic documentation of the city’s historic architecture.[vi] Johnston then built off the success of the Fredericksburg project to secure work photographing historic sites in Virginia funded by the Carnegie Corporation. Always one to turn every success into an opportunity to get an even bigger catch, Johnston turned her Virginia survey into a commission encompassing the architecture of the American South.  From 1933 to 1941 she traveled the South extensively with further funding from the Carnegie Corporation for a series of assignments known as “surveys.”

Johnston’s photographic surveys became her greatest legacy and intertwined with her work with the Historic American Buildings Survey (HABS).[vii]  Johnston developed a trusted survey method that will be familiar to many architectural historians: research the region, study local history and architecture, review maps, interview local historians, architects, and homeowners – all before she took the first shot with her camera. Johnston’s meticulousness in getting her shot just right showed her respect for her subjects, no matter whether it was a sharecropper shack or a school. Her tour spanned over 100,000 miles; Johnston photographed everything from slave quarters to plantations, and courthouses to cemeteries. In fact, she preferred photographing humble dwellings and structures, which she called “primitives,” over grand mansions:[viii] “Wherever I traveled I came across tragic examples of decay and neglect. … [t]he old farm houses, the mills, the log cabins of the pioneers, the country stores, the taverns and inns, in short those buildings that had to do with the everyday life of the colonists had been overlooked. In fact, no photographic records of them existed.”[ix]
historic ​buildings of the American South. Her efforts set the stage for the rise of the historic preservation field in the United States during the 1950s-1960s, when community groups began to rally against the demolition of historic buildings for the construction of modern buildings in their place. Johnston’s photography preserved the image of what once was. Time after time in city after city, her work to thoroughly document historic buildings and distinctive architecture led to the enactment of historic preservation laws or ordinances.[xi] While it may be difficult to trace her influence to saving a specific building, it is clear that her work increased public support for historic preservation in many communities, especially in the South.

In 1945, Johnston was honored by the American Institute of Architects by conveying an honorary membership for her work preserving historic American architecture through photographic record. Her work on the extensive photographic surveys in Virginia, North Carolina, St. Augustine, and Charleston led to the enactment of local ordinances and laws to protect the local architecture and restrict the ability to modify significant structures. These ordinances survive today with solid support from the local communities. Johnston viewed photography not just as a mechanical operation, but as an expressive art form; her photographs satisfied her clients while also capturing the raw truth of her subjects. She was not an activist for women's rights, but encouraged women to pursue a profession in photography and saw herself as an example of what could be accomplished. Frances Benjamin Johnston was an unassuming trailblazer in the field of photography and professional women and will not be forgotten.

[vii] Under the control of the National Park Service, the Historic American Buildings Survey (HABS) was the very first federal program for historic preservation, created in 1933. HABS hired photographers and other media artists to document the vanishing architectural history of the United States. Johnston worked with the program and its photographers and architects throughout the 1930s, in addition to the preservationist work she was doing for the Carnegie Corporation as part of the Carnegie Survey of the Architecture of the South project.
Ausherman, 2.