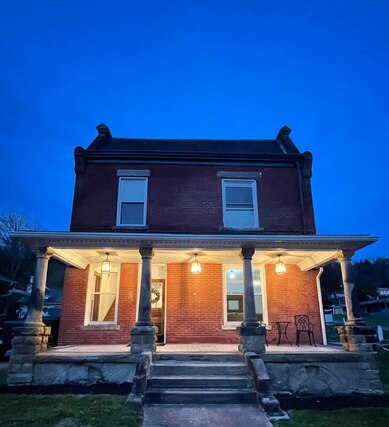 The Heritage Tourism Award is presented to projects that make a significant contribution to West Virginia’s cultural heritage tourism industry.

In many of West Virginia’s towns, one of the biggest obstacles to having a successful heritage tourism economy is access to overnight lodging. Jeremy and Matya Drennen saw this same challenge in their town of Philippi, and they chose to address this challenge by investing their own resources in restoring a historic home downtown.

​In 2021, Jeremy and Matya Drennen purchased the Chrislip House (built in 1902 by a prominent local businessman) with the vision of turning it into an AirBnB. They felt that a historic home, appropriately repaired and furnished and located close to local amenities and Alderson Broaddus University, could be a draw, and they were right! The Drennens have recently received “Superhost '' status on AirBnB and were booked for almost the entire month of July! PAWV selected Jeremy and Matya for this award because they believe so much in the revitalization and future of Philippi that they were willing to invest their own money, time and talent toward filling a much-needed niche in Barbour County.
Best Use of Historic Tax Credits Award - The Atlas Building Project (Charleston) 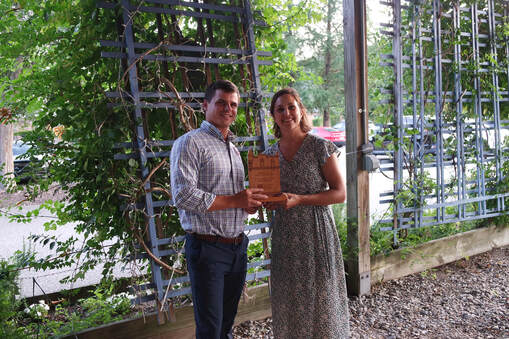 This year’s Best Use of Historic Tax Credits Award goes to The Atlas Building Project, an adaptive re-use project that transformed a large, vacant building and economic drain into the first large-scale, higher-end apartment building complex in downtown Charleston - the Atlas Lofts. This 65,000 square foot, 8-story building was designed by Charleston-based architect Tucker and Silling and is located in the Downtown Charleston Historic District.

Adam Markwood of Brian Wishneff and Associates served as the lead developer on the Atlas Lofts project. He and his team were able to access many resources to make this major redevelopment project feasible where others had failed or said it couldn’t be done. Adam also proved to WV legislators, key local officials, and other despondents that the increase of the state historic tax credit from 10% to 25% would attract major redevelopment and housing projects for our state’s capital - as seen with this project - he proved the market.

Other key partners included Charleston Area Alliance Downtown Housing Market Study, Architect Sakoian International with assistance from preservation design consultant Mike Gioulis, Persinger & Associates (who were the contractors on the project), Cade Vogelsong of Viking Construction (who was the construction manager), Jennifer Pharr of Riggs Commercial Realty (the leasing agent), and of course, the property owner - Martin Riggs of Riggs Commercial Realty - without whom, this project would have never happened. This project has had a tremendous impact on Charleston. The 52 apartments in the revitalized Atlas Building had a 100% lease rate less than 2 months from the project completion date and proved the market for luxury downtown housing.
Volunteer Award - Julia Bragg (Weston) 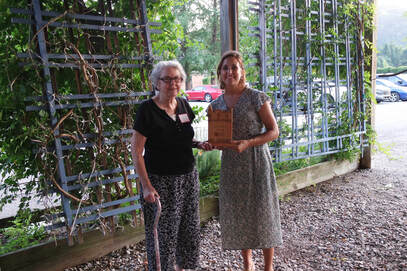 The Volunteer Award went to Julia Bragg, who has been teaching the art of heritage textile crafts for generations in Lewis County.

​Julia has dedicated over sixty years of service on the board of the Lewis County Community Education Outreach Services. She has taught heritage textile crafts at the Jackson's Mill Jubilee, The West Virginia State Folk Festival as well as in local schools and 4-H settings. Bragg's skill set is an invaluable and exemplary case of her dedication to carrying on the heritage of West Virginia fiber crafts and bringing them into the 21st century. In 2021, Ms. Bragg led a heritage fiber arts demonstration at the Weston Glass Museum, hosted by the Weston Historic Landmarks Commission as part of the ongoing programming surrounding the Smithsonian Crossroads in Rural America exhibit.

Julia has been an advocate for heritage arts and craft culture as well as youth education in her community and State. This nomination is well deserved due to Julia Braggs dedication to sharing knowledge and skill to preserve the heritage arts for decades, while inspiring new generations of artisans to carry on the arts and crafts that are imperative to keep these traditions alive.
Historic Landscape Restoration Award - Anna Cardelli (Weston) 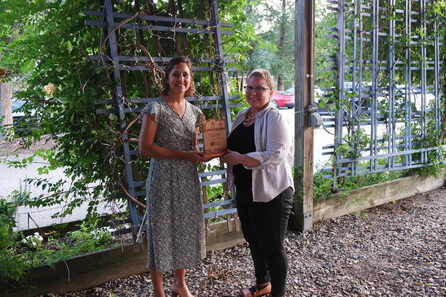 Through its Preserve WV AmeriCorps program, PAWV has been able to partner with local groups to preserve historic landscapes, and most specifically historic cemeteries. This work is not possible unless there is a local volunteer involved in restoring the cemetery. This year’s recipient of the Historic Landscape Restoration Award, Anna Cardelli, has been that person who is truly dedicated to preserving her town’s orphan cemetery.

​Anna has had resources put in place for the safety of the cemetery, ensuring less vandalism, and is currently working to preserve and restore the cemetery which is the final resting place for all the town’s founders and historically important citizens. She has organized several seasonal workdays at the cemetery to clean debris and is currently working on resetting monuments and cleaning headstones. She has received several grants for the cemetery that have gone towards interpretive signage and ADA accessibility. She was also the lynchpin in organizing a recent ground penetrating radar professional to come to Weston for the documentation of the cemetery and so the information can be used to properly place some of the monuments. She has put her own money into this project as well as secured funds from outside sources that have been extremely helpful throughout this process.

In addition to hands-on work at the cemetery, Anna’s research has been invaluable in the preservation efforts at the cemetery. She has worked with Catholic dioceses to confirm burials and also researched to find early photos and obituaries for the older burials. She has faithfully updated find a grave with all the new information she had found on those buried there as well as updated photos to reflect the current restored state of several stones (both in disarray and then repaired).
​AmeriCorps Award - Kelsey Romer 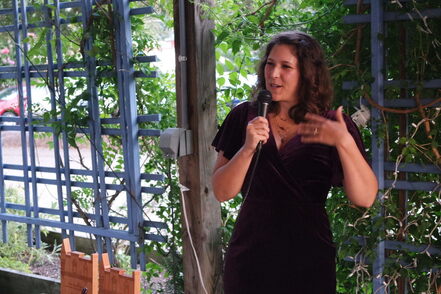 The AmeriCorps Award goes to Kelsey Romer. Kelsey is truly committed to national service and preservation. Having served 4 total AmeriCorps terms - 3 of which were in West Virginia - Kelsey has dedicated herself to preserving West Virginia’s cultural heritage. Her first AmeriCorps term was as a hands-on team member of the Appalachian Forest National Heritage Area where she helped to physically preserve buildings including Traveler’s Rest near Burlington and the Pleasant Green Methodist Church in Hillsboro.
​
During her stint with Preserve WV, Kelsey served with the Northern Brownfields Assistance Center’s BAD Building program where she actively participated in the Abandoned Properties Coalition’s historic preservation based teams (and has continued to keep the Historic Schools Team motivated in 2022) and helped plan a virtual learning series in the midst of the pandemic. This year, she serves with Woodlands Development Group supporting the rehabilitation of important local structures such as the Tygart Hotel in Elkins, and has successfully written and presented her first National Register Nomination to the SHPO just in the last few weeks. Kelsey represents another out of state talent that we have been lucky enough to lure to WV, and we hope that we can continue to keep her here to support the revitalization of our historic structures.
Michael Gioulis Downtown Preservation Achievement Award - Lauren Kemp (Huntington) 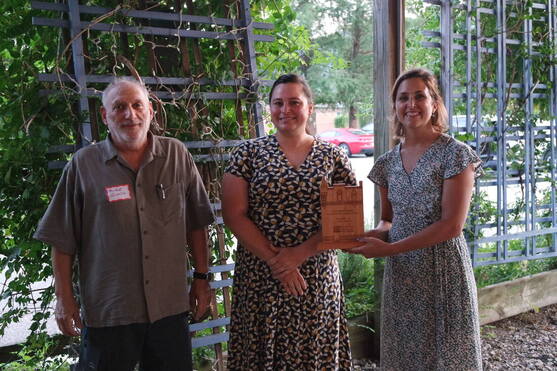 Lauren Kemp, the recipient of the first ever Michael Gioulis Downtown Preservation Award, represents Mike's spirit and ethos through her own work in downtown Huntington. Lauren is the WV OnTRAC community liaison and executive director of RenewALL, Inc. - a fledgling nonprofit that has made amazing strides in its short existence through its work with the Central City Antiques District, located at 14th Street West.

Lauren is working with a variety of State, Regional, and Local Partners to create a vibrant destination in this West Huntington Neighborhood - building on more than 30 years of community-based, volunteer-led projects that keep flowers planted and event activities planned. With support from the City of Huntington, a new public-private partnership has emerged with the intention to amplify the efforts of volunteers. This coalition is also the WV Development Office's Main Street America ON TRAC cohort with Lauren at its helm. Lauren is propelling this group forward with financial support from a National Endowment for the Arts Our Town Grant and alongside partners, is turning the district into a must-visit destination with arts, entertainment, local food, and shopping that is built on West Huntington’s historic industrial  setting.
Bob Weir Craftsperson Award - Phil Davis (Fayetteville) 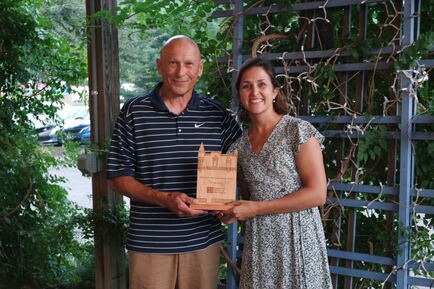 The 2022 Bob Weir Craftsperson Award goes to Phil Davis, a master craftsman who has contributed to the preservation all over our Mountain State during his careers at Danhill Construction & Allegheny Restoration. Philip Davis of Fayetteville, WV is being most recently recognized for his work restoring Hawks Nest Museum at Hawks Nest State Park last summer. Where he restored all the floors and oversaw the historic preservation elements on construction, but Phil’s work in historic preservation started about twenty years ago when he joined the team at Allegheny Restoration - who were coined in WV Living Magazine as Deep Preservationists - meaning they aim to retain a structure’s architectural fabric.
​
Phil has cut his teeth in historic preservation - so to say - with restorations of West Virginia’s Fletcher and Simpson Creek covered bridges. Jon Smith mentored in historic preservation as Phil previously had only worked in new construction, but as Jon recounted to me, Phil learned very quickly and went on to be a leader in the Allegheny Restoration firm. Phil went on to do almost all the restoration work at the Martinsburg Roundhouse, was superintendent of the work done on the Governor’s Mansion twice, and worked on the State Capitol building. Phil also worked on the windows at Baltimore’s Basilica of the National Shrine of the Assumption of the Blessed Virgin Mary for which he received the Craftsmanship Award from Baltimore’s Building Congress & Exchange.
Dr. Emory Kemp Lifetime Achievement Award - Michael Gioulis 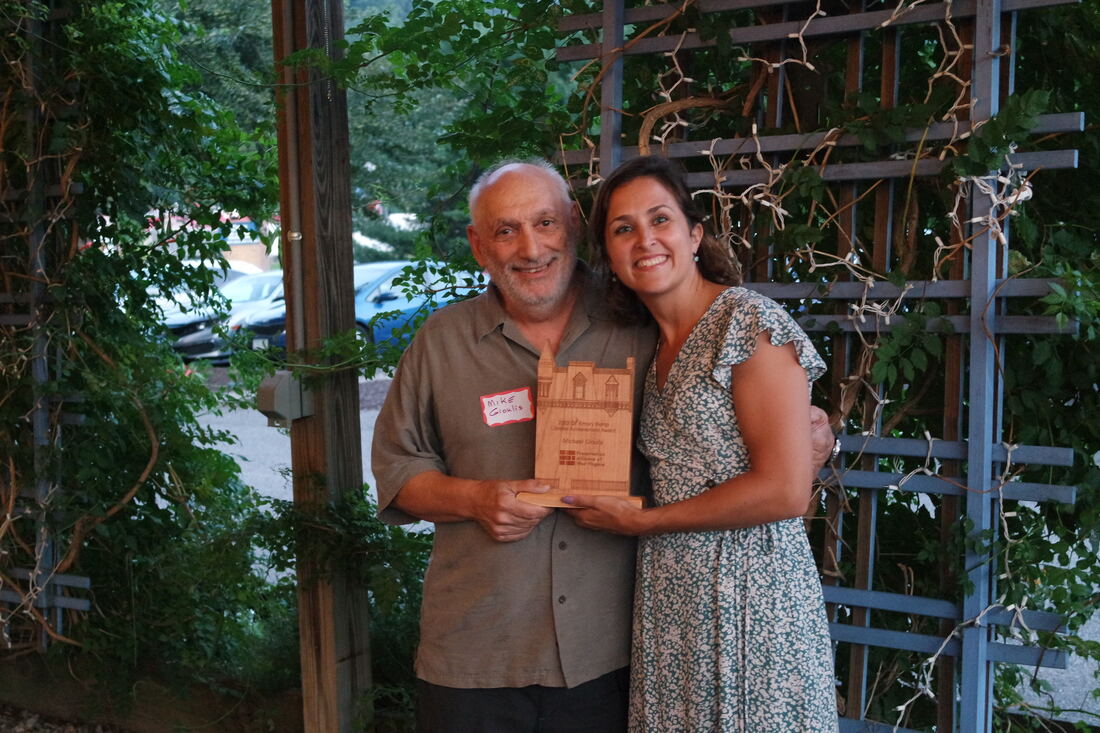 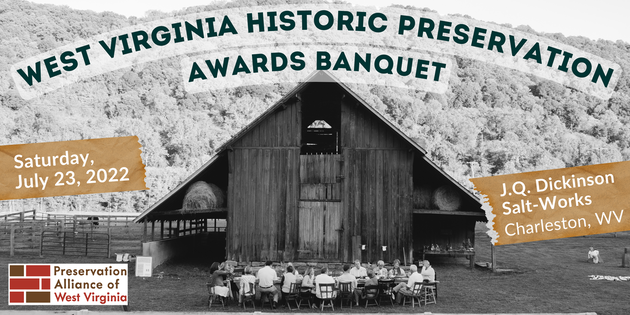 THANK YOU TO THIS YEAR'S champion TABLE SPONSORS

thank you to this year's advocate table sponsor thank you to this year's silent auction sponsors